PCCW Global, Orange and PEACE Cable International today signed an agreement during the Submarine Networks World event in Singapore to deploy the Pakistan and East Africa Connecting Europe (PEACE) submarine cable system, with a 12,000km ultra-low latency high-speed cable system that will relieve critical congestion on one of the busiest data routes in the world.

This trilateral agreement among PCCW Global, Orange, and PEACE Cable International follows the signature of a memorandum of understanding that was announced during the Capacity Europe international telecommunications event in November 2018 in London. In terms of the cooperation, Orange will supply and operate the cable landing station in Marseille, as well as linking the system to one of the city’s major data centers – creating a connectivity gateway across Europe and on to the Americas through existing transatlantic networks.

PEACE is a privately owned cable system connecting three of the largest and most populous continents in the world – Asia, Africa and Europe. Increased global demand for connectivity is resulting in congestion on the busy route. In addition, Africa has the fastest-growing youth population in the world and is a market particularly ripe for investment because of the rapidly growing number of Internet users and a corresponding increased demand for connectivity.

When complete in 2021, the PEACE cable system will provide the shortest and most direct data route from North Asia to Europe, combined with exceptionally low latency which is vitally important for a wide array of commercial and consumer applications.

Mr. Marc Halbfinger, Chief Executive Officer, PCCW Global, said, “Our collaboration with Orange is a critically important step towards bringing PEACE online and we trust the capabilities and vast experience of their teams in France to provide a successful and timely delivery of the European leg of the project. Orange has vast experience in submarine cable infrastructure development. So we are confident that Orange will not only successfully provide the necessary cable infrastructure in France, but also benefit from being one of the first major users of the PEACE cable to connect important and growing traffic from Africa to Europe.”

Mr. Jérôme Barré, Chief Executive Officer, Orange, said, “For Orange, PEACE is a major investment as it will provide greater route diversity, improved connection security and guaranteed support for increased capacity across all regions in the Indian Ocean zone, particularly Réunion and Mayotte.”

Mr. Wu Qianjun, Chief Executive Officer, PEACE Cable International, said, “The PEACE project has been progressed very well and the equipment manufacturing has been achieved more than 60%. The system will be ready for service on time based on its schedule. We are confident that PEACE will provide low-cost capacity for those fast growing regions and enhance the routing diversity in Asia, Africa and Europe.” 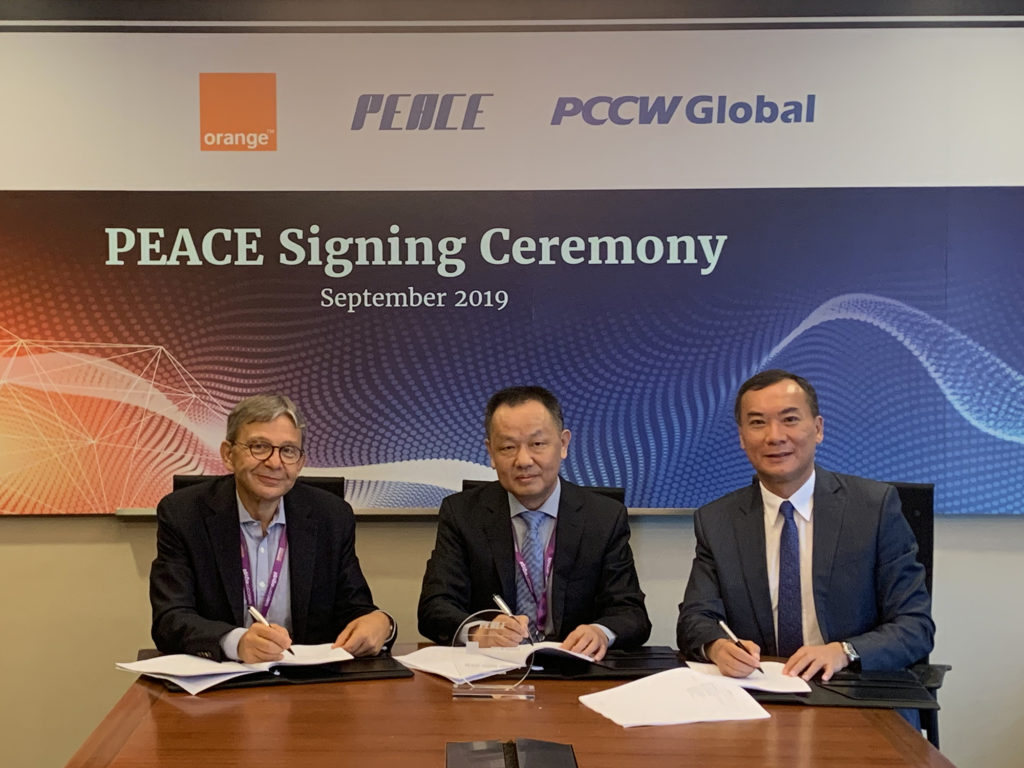 We use cookies to ensure that we give you the best experience on our website. If you continue without changing your settings, we'll assume that you are happy to receive all cookies on the PCCW Global website. However, if you would like to, you can change your cookie settings at any time.

AcceptBlock non-essential cookies
You can revoke your consent any time using the Revoke consent button..